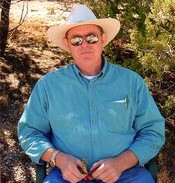 James D. Crownover grew up in the woods and on the streams of central Arkansas. He spent many days walking the fields and picking up arrowheads and other artifacts, possibly some of them left by his ancestors. Jim has a keen interest in history, especially that of the West and Southwest. Early on, he became interested in the everyday activities of the pioneers, Indians, and explorers and the oral histories of their adventures.

Upon retirement as a Civil Engineer, he began writing a historical novel about four generations of a mixed Cherokee family that migrates from Tennessee to New Mexico Territory in the nineteenth century. The results of this work were four books. The first book is Wild Ran the Rivers, which in 2015 won two Western Writers of America Spurs for best historical novel and best first novel. It is about Mississippi River pirates and slavery and the New Madrid earthquakes of 1811-1812. The other three books are: The Battle of Half Moon Mountain, Picketwire Vaquero, which was recognized in 2017 by True West Magazine as Best of the Rest Frontier Fiction, and the last of the four, Tales of the Last Frontier. His fifth book, Triple Play, is about a young man and his quest to avenge his father’s murder by cattle thieves. It was a finalist in the Will Rogers Medallion Awards and also the 2017 New Mexico-Arizona Book Awards. The Ox That Gored is about Judge Isaac Parker’s Deputy US Marshals, and his seventh published book, If These Walls Could Talk, is newly released.