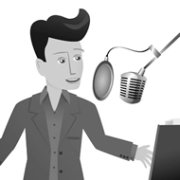 Barry Greene, a native of St. John’s, Newfoundland, was trained as a classical actor in England and Canada, and over the past 35 years has appeared in many classical and contemporary plays, as well as television and feature film productions between Canada and the United States. His voice has been heard broadcasting on the Canadian Broadcasting Corporation as well as on audiobooks, radio and television commercials and documentary films. Among his current projects is the audio version of If I Were Your Daddy, This Is What You’d Learn, by Julia Espey, scheduled for release in June, 2011, episodes of Hard-Drive 13—a new ‘web-tv series’, and adapting a prominent British novel to a screenplay.